I feel like I've really reached the end of the road in my quest for the truth about what really happened to my sweet brother William. I believe I have turned every stone that I had the power to turn.

All my life, I've been made fun of. As an awkward child, trying to find myself, others found me out first and threw stones. It took three decades for me to figure out that those were the real freaks.

I am bold. I am strong. I am shameless, and I am not afraid to bare my mind, body or soul to anyone mature enough to examine and learn from the experience. Words bounce off of me. Faggot! Yum! I'm not like the other gays. I'll give you Faggot and make you like it!

People have been trying to silence me for years. I was kicked off of local radio for speaking my mind. Gay media has shunned me. They don't "get a bitch"! Fuck the gay mafia, ie. media, ie. Advocate and Out magazines. They are filled with fluff and corporate sponsors who would continue the myth that we all become trolls the moment out body fat index increases or we turn 25. I'm too sexy! You haven't seen anything yet! My former classmates in Eminence Kentucky have all had the opportunity to view photos of me, fully nude and fully erect. I have absolutely nothing to hide. Perhaps it's the person looking at my images who has the problem? I know the difference between porn and art. Do you? Some people don't. They say that my video series, documenting my investigation into William's death is graphic, sexual and perverted. They say that I have dishonored my brother by posting nude photos of him online and in my video. They are specifically disgusted by this picture below: 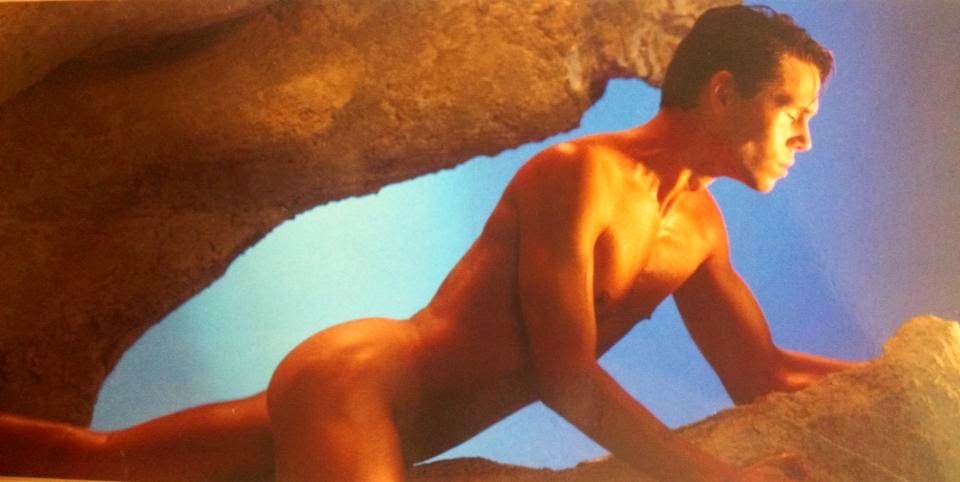 This photo was taken by a Vogue photographer, who was flown from NY to LA especially for this shoot. The set cost thousands to create, all just for this shoot. My brother was paid thousands for his modelling. The local media in Louisville and Indianapolis have indicated that my story is too graphic for them to consider covering. Gee, I don't remember asking them to play my video on the air. I asked them to perform their own investigative reports on a serious local story that affects everyone. Yes, my brother William was a porn star. Does that somehow make his death less worthy of investigating? I think not. If the media, or anyone else, thinks I'm going to candy coat who William was, in order to make them more comfortable, they can fuck themselves. I call it the Naked Truth because that's exactly what it is. It's not Nicki Minaj, phat-azz true. It's not a Cyrus Twerk! It's not a greasy Kardashian Ass going viral for no fucking reason, and getting coverage on every news channel in America. No! It's the story of one man, ME, stripping emperors, exposing their corruption, and holding them publicly accountable, in society, for what they do. I have grown accustomed to being that little boy, at the parade, yelling, "The Emperor is naked!" while ass kissing, political whores deny the truth all around me, to their own detriment. I am that boy, and I will be heard, even if I have to strip myself down to the bare bones to get you to pay attention to the truth. I am the living light of the Naked Truth shining down upon you. Step into the light friends. If I don't know the truth, I'll tell you. Nobody knows everything, but I know what I know. The media have not only refused to tell my story, they've refused to allow me to post it on their facebook pages, in some cases.

Below are a couple of screen shots a friend shared with me. She was trying to post my video on the local news page, and a moderator responded to her with hostility. He practically accused me of peddling porn. What a fucking idiot! Like he hasn't allowed booty pics on the page, or even posted them in the form of fluff stories they cover. And as for my claims being "alleged". Well, I've seen every media outlet in the country report stories of "alleged" sexual abuse by Bill Cosby. Let's face it, there is not a shred of physical evidence against Cosby, and yet the media keeps replaying the story for ratings anyway. And if my story is "alleged", then it would behoove any real journalist to investigate the allegations, rather than censor a bitch on facebook like a fucking coward! 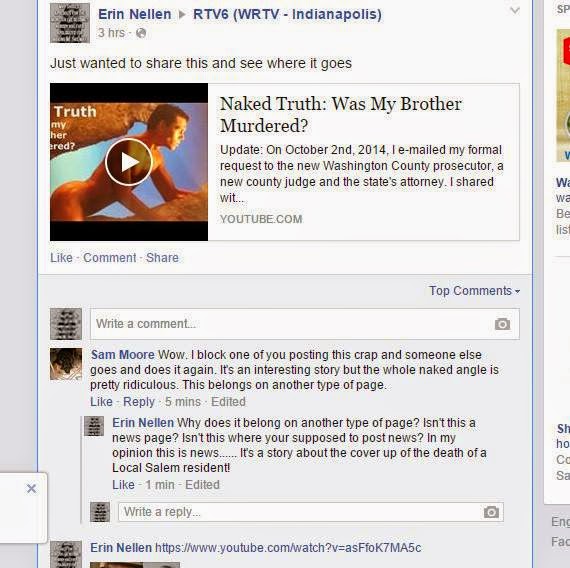 
The media has been all over a story about a young, black man who appears to have been killed and hanged from a swing set.


I am deeply saddened by this young man's death. Perhaps more than most, I can relate to his family's grief. Not knowing who killed your loved one, and being told it was a suicide, without any evidence to support it is tragic. I've suffered with this pain for 14 years. There are differences in the cases of this young man and my brother William, but the main story is the same. Young man found hanging dead. Evidence goes missing. Coroner rules death a suicide. Family lives with injustice. Only in this young man's case, the FBI and the NAACP are investigating his death now. Will they find out the truth? I am praying they do, and I will be watching this story as it progresses to find out what unfolds. In William's case, I've reached the end of the road. I can't imagine there is anything else I can possibly do, on my own, to uncover the truth about how he really ended up dead that night. One thing is for sure. The media has refused to cover William's death, while running this story on a loop. Where's the equality?

I've posted a lot about this on facebook, and my true friends have been kind enough to share my posts. To catch everyone up on exactly what happened, what I've done to find the truth, and who I have encountered along the way. I've had the truth withheld from me for 14 years. I've just discovered that there was never enough evidence to rule William's death a suicide. That's an injustice that will never be addressed by the law.

My friend David Elijah wrote a story for the National section of the South Florida Gay News about what I've been through. He is the only journalist who had the guts to investigate this story. He called the people who were withholding documents from me, and their responses were incredibly suspicious. I have to credit David for uncovering the fact that the death scene photos actually existed and were at the police station in Salem Indiana. Amazingly, shortly after his phone call to the prosecutor's office, the photos turned up at the police station, and the coroner was informing me via e mail. Talk about connected! It's like the three stooges finally got their shit together for five minutes. Then they refused to send me the photos anyway. Here's David's story below:

Now, if you missed any episode of my three part series entitled:

Naked Truth: Was My Brother Murdered

Here they are, in sequence, for you to see. I've worked very hard on this series. I've had to relive the pain over and over again through photos I share in the project, and the behind the scenes investigation into my brother's death. This has been the hardest experience of my life. I lost twenty pounds. I'm skin and bones from the stress, as you will see in part 3, The Final Word. I felt it necessary to address my adversaries, personally. I don't want anyone to accuse me of hiding behind my project, narrating from a distance. No! This is up close and personal. My last word on this subject is a direct message to those who have contributed to my suffering. Did you really think I would just let them off without pointing them out to their neighbors? And before you click play on any video I have ever created, know this. I am not famous. I do not claim to be famous. I am not a celebrity.  I am a song writer who wrote and recorded a song called Celebrity, but that's art, not reality. That said, I am a wizard when it comes to locating and captivating a local audience. And I'd like everyone to know that when I view the analytic data for my videos, the views overwhelmingly come from Southern Indiana, where I have intended them to be viewed. So don't be fooled by a low view count. It's reaching precisely the demographic it was intended for, Salem Indiana and the neighbors of everyone featured in it.